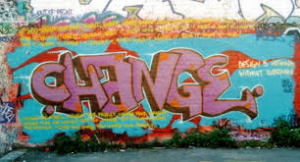 A few weeks ago, I attended a big industry-wide conference called LegalTech. You’re probably familiar with the scene — lots of people, exhibit booths, and glossy handouts promising to solve all problems. The sameness of it all is what struck me. Though some were snazzier than others, the booths and handouts all blurred together after a while. But the real redundancy — the true Groundhog Day movie moment– was in recognizing that every year the pattern repeats. The masses gather, talking about the “new solutions” to the entrenched problems everyone has been grappling with for years. But few people stop to ask, what happened to the past “solutions” that were supposed to fix this? Or, even more to the point, why should we believe you this time? And that got me to thinking, of course, that the real issues so many of us face professionally are not really about technology, but more about change management. And that got me to thinking about Snoop Dogg and Ice Cube.

Here’s why. I have 3 kids, ages 14, 12 and 10. A few weeks ago, one of them asked me — “Dad, who is Snoop Dogg? And what’s a G thang?” I, of course, tried to keep a straight face and did what parents often do to buy more time — responded with a question. “Oh, Snoop — where did you hear about him?” My daughter proceeded to tell me about this reality show she saw on ESPN, “Snoop & Son: A Dad’s Dream,” about a “cool older guy” [her words] and his son, who is a top football player at a high school in Las Vegas. (It’s Bishop Gorman High School, and hence the parents and families wear to the Friday night games tee shirts emblazoned with the phrase — “It’s a G thang”).

So I explained how Snoop originally started as a young, hard-core rapper and went on the be in movies like Training Day, Starsky & Hutch, and Scary Movie 5. (My daughter was not familiar with these movies, which made me feel grateful, but at the same time, a bit old.) In a way,” I said, “he’s sort of like Ice Cube, who started as a rapper in NWA, and went on to be in movies like Boyz in the Hood, Anaconda, Barber Shop, and Are We There Yet?. “Oh yeah, I know him,” she said, “he’s funny.” (She also asked — what’s NWA? And I responded, of course — “that is what their group was called.”)

Anyway, we talked some more, and watched the Snoop & Son show together. I thought it was pretty entertaining. He does strike me as being this avuncular, accessible guy, who really is in some ways just another parent in the stands. (And in some ways, not.) At the same time, I thought to myself — how did this happen? How did we go from Snoop of Death Row Records to Snoop as the friendly father cheering on his son’s Catholic high school football team? And how did we go from Ice Cube rapping in Straight Outta Compton to Ice Cube starring in slap-stick children’s movies.

To me, their stories don’t get nearly enough attention as prime examples of change — of truly shifting deeply held attitudes (not just thoughts, but feelings). Those of us who were around back in the day can remember, first-hand, the initial reactions they garnered. Many people were appalled. They felt threatened and believed Snoop, Ice Cube and the broader rap / hip-hop culture represented the full-blown demise of mass media standards and maybe even society itself. If you were to have told folks that these guys would end up starring in children’s movies, and being front and center in a reality show aired by a Disney-owned company, you might be deemed insane. And to me, that’s the most amazing part of it.

In thinking about how that change occurred, and the steps it took, there are some great lessons for the business world. Whether your job involves helping clients change, or helping your own company change, or selling products that improve upon the current state — here are some observations from the Snoop and Ice Cube examples.

1) Lasting change starts incrementally. You don’t go from Straight Outta Compton to Are We There Yet? in one fell swoop. The incremental steps along the way are key to making the amount of change more tolerable, less threatening. Our job in leading change is to break off the right amount for the situation, and position it as good strong improvement, which showing how it is not impossibly far afield from the current approach. This requires knowing and understanding your audience very well, and building credibility and momentum with early successes. (This thinking, of course, applies where there is latitude to change more deliberately to ensure lasting uptake. If the urgency is more pressing — some dire external competitive threat, for example — then a faster pace may be required. But incrementalism should still be applied where possible. Otherwise you jeopardize real and lasting uptake by going too fast.) For many of us, the task is to figure out the right incremental steps — the Anaconda and Barber Shop intermediate steps necessary to achieve the longer journey.

2) The key to change is showing, not telling. If you are in the business of improving things in a significant but disruptive way, I think you have to go beyond mere explaining and instead show. This is especially true when — as almost always is the case — you are seeking to change not just thoughts but feelings on how people have done things for years. You almost can’t even explain it. (It would be like trying to say, back then — “Snoop is actually a good guy. Let me explain why.”) Instead, people have to experience the change for themselves and draw their own conclusions to truly get beyond that initial skepticism. With Snoop and Ice Cube, that meant seeing them in a movie or cameo role, casting them in a different, more “acceptable” light. In the business world, the equivalent would be a well-crafted pilot project — showing exactly what is feasible, and letting people’s positive experience trump their earlier preconceptions. And in the business world, the change we are talking about is often far beyond the technology itself. It’s about behavior, process and culture as well. That’s one of the key lessons so many are missing — especially at that conference I mentioned, andmore broadly in terms of how technology is (and is not) used in Legal and other industries.

3) Real change takes time — the more drastic, the more time. An important lesson, I think, from the Snoop and Ice Cube examples is that things mellow over time. Yes, this applies to people. But maybe importantly, it also applies to perceptions. What had been “radical” and new, becomes more tolerable over time, in part, because of repeated exposure. It may be that we become desensitized. Or, maybe we come to truly understand the new thing better, and see it more for what it is, as opposed to what we judged it to be. Either way, I would suggest that our goal in leading change is to find the right messages, and the right ways to strategically deliver them again and again so that people can over time understand the improvement for what it truly is, as opposed to judge or shun it initially based on incomplete information that fuels deeply-held reservations. At the end of the day, I think it’s fair to ask the question — who changed more . . . Snoop and Ice Cube or society? I see it as a combination of both, with some fascinating lessons along the way.